So I watch WWE wrestling on TV for four hours every week. Well, four hours worth of programming, although I probably only spend about two hours on it, thanks to the wonders of DVR and the fact that people like Chris Masters are so fast-forwardable. But anyway, it’s the first paragraph, and I have already digressed isverigeapotek.com.

I have noticed the same guy in the audience at least six or seven times in the last several months. The first time I noticed him was when Simon Dean first showed up, and he was ripping on some fat lady in the audience for being fat. This guy, in a red hat and some sort of mechanic’s shirt with a nametag on it, was sitting next to the fat lady and looking extremely offended. Well, obviously, if they are going to rip on a lady for being fat, that lady is someone they hired to sit there and be fat, so I wondered at the time if they had hired him to look offended, or if he was just clueless.

Maybe he is at every show, and I only notice him when he wears the red hat and mechanic’s shirt. Maybe he is only at some. I don’t know. But I really want to know who he is, ya know?

Here is a picture of him, taken with my digital camera during last night’s episode of RAW. He was sitting in the front row again, right behind Lilian Garcia, and this picture is taken right after Stephanie McMahon slapped Lilian. If anyone knows who he is or how I can find out, please let me know. 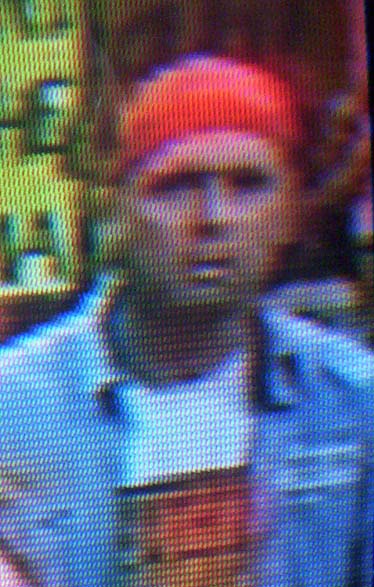